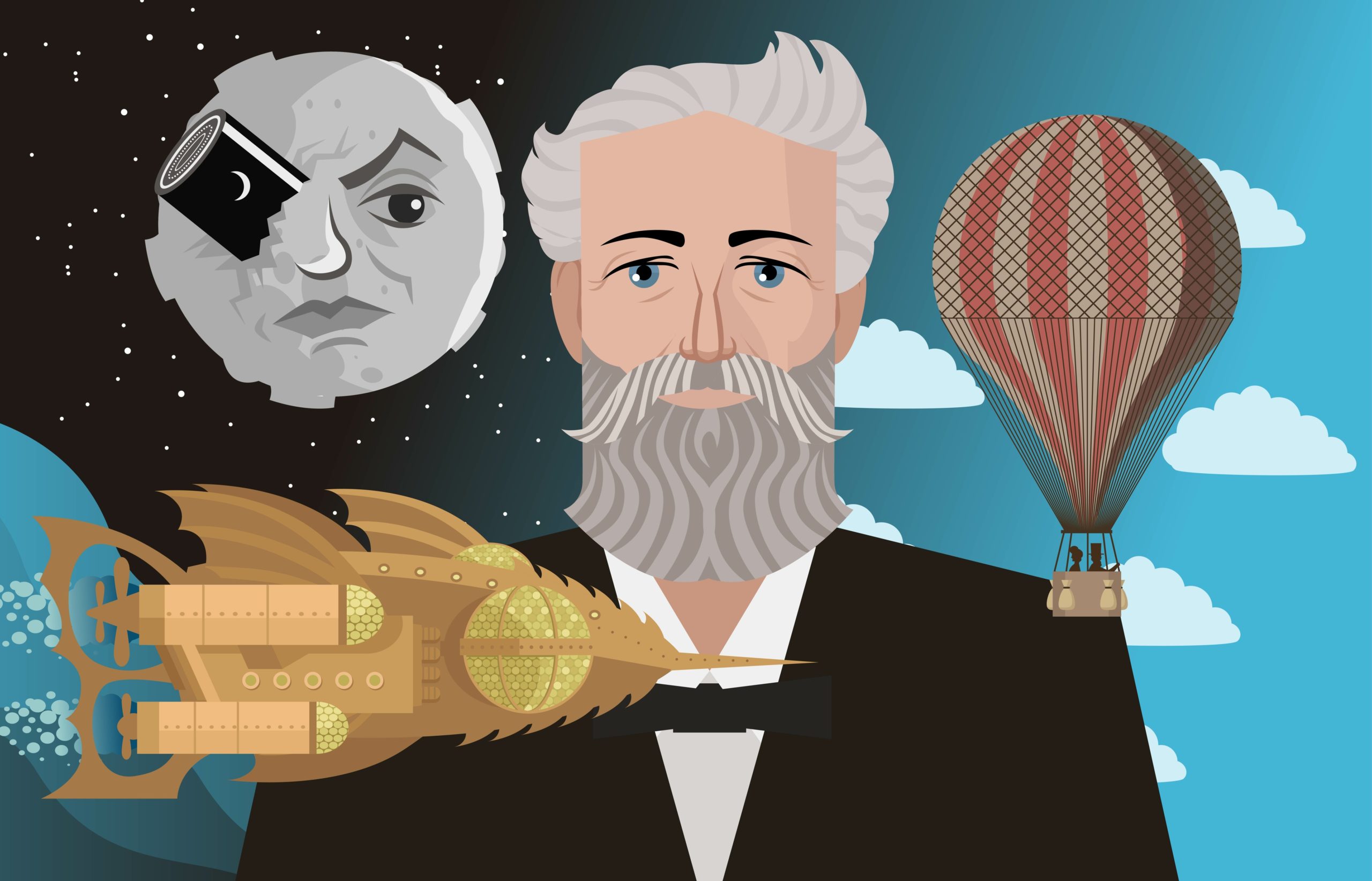 Around the World (and then Some)

May 5 is celebrated around the world[1] as the birthday of Nellie Bly (née Elizabeth Jane Cochran; May 5, 1864 – Jan. 27, 1922), the most famous person to come from Pennsylvania since the colony was founded by William Penn in 1681.[2] Nellie, then still Elizabeth, first came to public notice in 1885 at 20-years-of-age when she wrote an anonymous reply to an article titled “What Girls Are Good For”[3] by Erasmus Wilson, published in the Pittsburgh Dispatch. The editor of the Dispatch was so impressed with her writing that he took out an ad seeking her identity. This led to a full-time position as a reporter and columnist for the Dispatch and her pen name, Nellie Bly.[4]

Bly helped establish the tradition of American investigative journalism, beginning with a series of articles on the lives of female factory workers, then as a foreign correspondent in Mexico. When she was later relegated to reporting on “women’s issues” (fashion, society, and gardening) she left the Dispatch and Pittsburgh for New York City, where she took an assignment in 1887 from the New York World to go undercover as a patient at the Women’s Lunatic Asylum on Blackwell’s Island (now Roosevelt Island) located in the East River between Manhattan and Long Island. She first checked into a boarding house, the Temporary Homes for Females, where she intentionally deprived herself of sleep to gain a crazed physical appearance to go along with her intentionally wild behavior. That worked, and she ended up in police custody. After several examinations, she was committed to the Women’s Lunatic Asylum, as intended. Once there, she stopped acting and behaved normally, but the staff continued to treat her like all the other patients – that is to say, deplorably. After 10 days, The World secured Bly’s release and she wrote a series of articles detailing her experience on Blackwell’s Island, later collected and published as Ten Days in a Mad-House.

In 1888, inspired by Jules Verne’s Around the World in Eighty Days (Le tour du monde en quatre-vingts jours), first published in 1872, Bly proposed taking on Phileas Fogg’s fictional challenge of circumnavigating the globe and making it a reality. Her editor refused, saying “No one but a man can do this.” Bly replied, “Very well. Start the man, and I’ll start the same day for some other newspaper and beat him.”[5]

The first circumnavigation of the globe (by men) had taken three years to complete by sea and had suffered a 96 percent attrition rate.[6] Subsequent attempts had gotten faster, and less fatal, but were still not for the faint of heart. But, a year after Bly had first proposed it, the editor of the World finally approved the assignment. So, at 9:40 a.m. on Thursday, Nov. 14, 1889, with two-days’ preparation, Bly departed from New Jersey aboard the steamship Augusta Victoria heading eastward. Unbeknownst to Bly, Cosmopolitan magazine sponsored its own attempt by Elizabeth Bisland, who departed the same day, heading westward.[7] For her round-the-world trip, Bly took with her the dress she was wearing, an overcoat, hat, a handbag with spare underwear and toiletries, and a pouch around her neck containing a mix of U.S. dollars, British pounds, and gold. During her travels, Bly met Jules Verne in France,[8] traversed the Suez Canal in Egypt (which had opened in 1869), and visited a leper colony in China. While in the field, she sent in short dispatched by telegraph, and longer reports by mail. Bly returned to New York on Jan. 25, 1890 after 72 days of travel – three days ahead of her original schedule of 75 days and beating Phileas Fogg by eight days.

Since Bly’s time, air travel (and individual passports for women – see footnotes) has made circumnavigation much easier, faster, and safer. The current record for circumnavigation by a woman traveling alone,[9] as did Nellie Bly, is three days, 14¾ hours – one of the few positive achievements to come out of 2020. In the meantime, various circumnavigation records have been set, including:[10]

Nellie Bly’s trip around the world wasn’t the only thing inspired by the imagination of Jules Verne. Verne was born on Feb. 8, 1828 in Nantes, France. His first (unpublished) novel was written in 1847 when he was 19. His first literary success, a stage play co-authored with Alexandre Dumas’ son, premiered at the Théâtre Historique in Paris in 1850. Verne’s principal literary career ran from 1865 (Five Weeks in a Balloon) though 1905 (Invasion of the Sea) and included more than 50 novels, stories, and plays.[13] His most successful series, the “Voyages Extraordinaires,” included Journey to the Center of the Earth (1864), Twenty Thousand Leagues under the Seas[14] (1870), and Around the World in Eighty Days (1872). A number of additional books were published after Verne’s death, culminating with Paris in the Twentieth Century (1994), from a manuscript discovered by Verne’s great-grandson in 1989. Jules Verne is associated most closely with science fiction (he is often called “The Father of Science Fiction), but his writings were also part of the literary avant-garde and surrealism. He is the second-most translated author of all time, ranked between Agatha Christie and William Shakespeare. Author Ray Bradbury summarized the lasting influence of Jules Verne on both science and science fiction by saying, “We are all, in one way or another, the children of Jules Verne.”

Georges Méliès A Trip to the Moon (Le voyage dans la lune; 1902) was the first film inspired by Jules Verne’s work,[15] and one of four such films released during Verne’s lifetime.[16] It has been followed by at least 175 other shorts, features, theatrical serials, television episodes, and series, notably including Disney’s 20,000 Leagues Under the Sea (1954), starring Kirk “I am Spartacus” Douglas in his first – and likely only – singing role,[17] and (currently) culminating in 2021’s animated feature Around the World (a frog challenges a marmoset to circumnavigate the globe in 80 days) and the mini-series Around the World in 80 Days (starring David Tennant as the famed Phileas Fogg).

The complete Jules Verne audiovisual oeuvre can be found in the EIDR registry, with links to secondary sources for more information about these works ranging from full cast and crew to synopsis and box office performance.

[1] Well, there may be better known holidays celebrated on May 5 (or Cinco de Mayo, if you will), but Nellie Bly led a no less remarkable life.

[3] Spolier Allert: birthing children and keeping house, it would seem.

[4] At the time, it was common for female authors to use a pseudonym. She intended to be named for the title character in the minstrel song “Nelly Bly” (1850) by Stephen Foster, but a editor’s typo led to her being first published as Nellie Bly, and that name stuck.

[5] Keep in mind that at this time, women had yet to obtain the vote and married women could not have a passport in their own name – they were identified on their husband’s passport as “and wife”.

[6] Ferdinand Magellan’s Armada de Molucca expedition (270 men aboard 5 ships) left Seville, Spain on September 20, 1519 sailing westward. Magellan died in battle in the Philippine islands and was eventually succeeded by navigator Juan Sebastián Elcano. When the expedition returned to Spain on September 6, 1522, it consisted of 18 men and 1 ship (the Victoria).

[7] Bly didn’t learn about Bisland’s attempt until she was already in Hong Kong, Bisland having passed through Hong Kong earlier, heading the opposite direction. Bly refused to make it a race between two women, saying that she was only racing against time. Still, Bly won the non-race, finishing 4½ days ahead of Bisland, in part thanks to Joseph Pulitzer, owner of the World, who chartered a train to take Bly from San Francisco to New York when rough weather in the Pacific caused her to arrive two days behind schedule.

[8] Jules Verne told Bly “If you do it in seventy-nine days, I shall applaud with both hands.”

[9] Dr. Khawla Al Romaithi of the United Arab Emirates – the UAE is leads the Gulf states in gender equality, though it is 49th overall.

[10] Specific records aren’t kept, but the theoretical minimum time to circle the earth in space (in a stable, un-powered orbit) is 85 minutes. The International Space Station orbits once every 97 minutes.

[12] In an Air France Concorde with 18 crew and 80 passengers, departing JFK eastward.

[13] Most of Jules Verne’s novels first appeared as magazine serials and were later collected and published in book form.

[14] Often incorrectly called “… under the Sea” (without the “s”), leading to the misapprehension that the Nautilus submarine reached a depth of 20,000 leagues. However, a league is a measure of distance, not depth. (Depth would be fathoms, where 1 fathom = 6 feet.) A league was originally the distance one could walk in an hour. In the English-speaking world, it was later standardized as three miles. Since this is a nautical story, that would be three nautical miles or 3.452 statute miles (5.556 kilometers). However, since the story was written in French, the historical French “lieue” would apply (1 lieue = 4 km or about 2.5 miles). Taking all of this into account, the title refers to the distance traveled aboard the Nautilus while submerged, which works out to the equivalent of two full circumnavigations of the globe at the equator. (You can’t actually do that in a submarine, since land keeps getting in the way, so there was likely a lot of going back-and-forth instead.)

[17] Kirk Douglas is also seen to play the banjo and sing in Man Without a Star (1955), but both are believed to have been dubbed.

The Audiovisual Works of Jules Verne