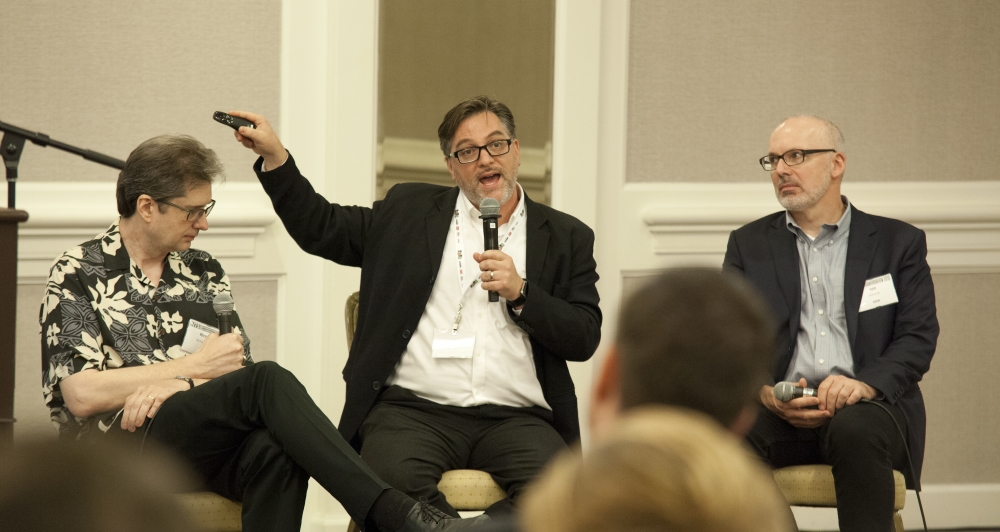 HITS Spring: AFI Looks to EIDR to Enable Its Future

UNIEVRSAL CITY, Calif. — The Entertainment ID Registry’s (EIDR) executive director Will Kreth and director of engineering Richard Kroon were on hand for the May 23 HITS:Spring presentation “AFI & EIDR: Identifying our Cultural Heritage – Enabling the Future,” though neither had much to say.

They let Scott Bly, director of information technology for the American Film Institute (AFI), do all the talking for them, as he praised the recent EIDR-AFI partnership, which sees AFI registering all film titles with EIDR’s unique IDs, in order to enable universal identification and tracking.

“A lot of people are familiar with a little part of AFI, but not all of it, what we’ve done in the past, and what we’re doing now,” Bly said, sharing how since its beginnings in 1965 as a nonprofit, intended to preserve history of motion pictures, honor artists and their work, and educate future filmmakers, the group has seen the amount of content its sitting on grown exponentially.

AFI runs the AFI Conservatory education program, the Young Women in Film initiative, and the AFI Fest film festival. The group’s catalog of content is touted as “the definitive record of the first 100 years of American feature film,” it has preserved more than 37,000 earlier titles for the Library of Congress, and the group’s AFI Life Achievement Award is considered one of the top honors in the industry. And for 50 years AFI has been collecting interviews, festival videos and more from all these events and content sources, and “the challenge now is how do we take that 50 years of film and video, and do something with it?” Bly said.

AFI’s catalog of content — think all-time classics like “Citizen Kane” and “All About Eve” — was what drove the group to partner with EIDR, Bly said. “We needed to update, modernize, use this data, and make it available to more people,” he said. Using EIDR, the catalog is better used by academics and others as a research tool, giving them easy ability to find what they’re looking for. There’s also a commercial aspect, with entities like Turner Classic Movies powering its platforms via data from AFI’s catalog.

“We got behind the idea of EIDR … because we can license content out more automatically, to providers that need the ability to backfill [their offering],” Bly said. “EIDR, for us, represents a controlled asset — we have about 60,000 film records in our database — and EIDR has all these unique identifiers about what that film is.

“What I like about what EIDR that ability to link the abstraction of a film, which is what most of our catalog data represents … to different pieces of the database as well.”

Next for AFI and EIDR is the “Women They Talk About” project, which will look at gender parity across the history of the film business, using EIDR data to discover which women worked on which films throughout the AFI catalog.

“We’re doing a lot of research to prove [gender parity in film],” Bly said. “In front of the camera, behind the camera, and off-screen credits, using data.”

The event was produced by the Media & Entertainment Services Alliance (MESA) and the Hollywood IT Society (HITS), in association with Women in Technology: Hollywood (WiTH); CDSA; and the Smart Content Council.