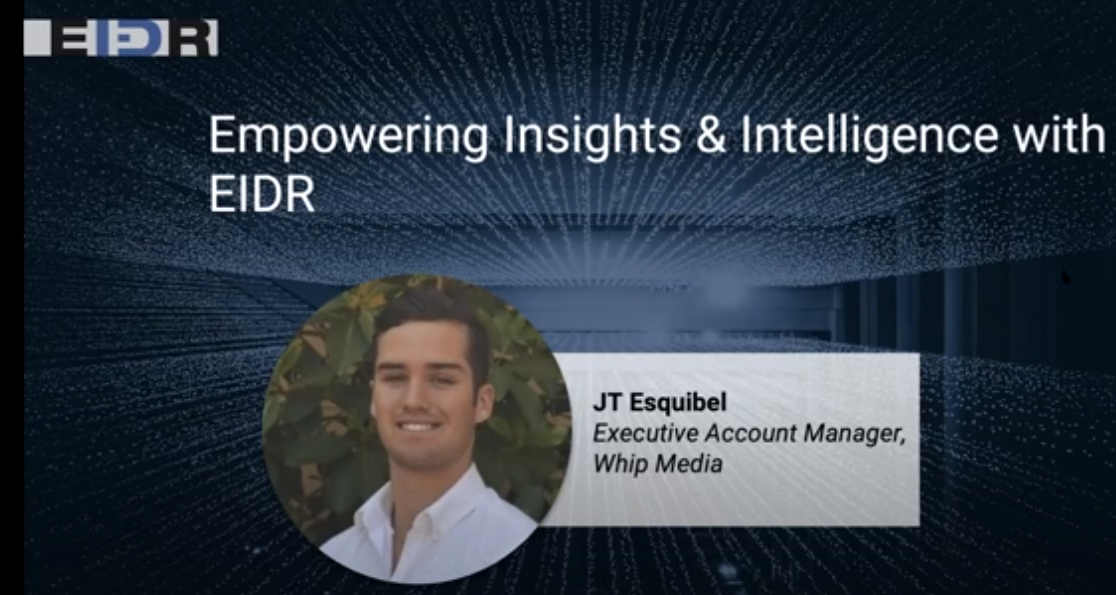 Whip Media provides insights and intelligence to media and entertainment companies that help them figure out how their movies and TV shows will perform before they are made available to the public. And EIDR’s universal identifiers play a significant role in helping Whip achieve that, according to JT Esquibel, executive account manager at Whip Media.

Universal identifiers have become a critical component, not just for titles, but for buyers and sellers to connect and exchange unique datasets. In today’s chaotic content environment, it is critical to combine supplementary insights and consumer behavior like reactions, sentiment, preferences, consumption, affinity and engagement that are made possible by EIDR IDs, Esquibel argued. This is making more informed decision-making around licensing and distribution possible, he explained.

“We’ve seen a lot of focus lately being on all the platforms and the content” that is being released on them but less insight into “how this content is being valuated, how it’s being bought, how it’s being sold,” he told viewers.

However, “in order to be a player in this space, you’re going to need the best data” and it’s Whip Media’s goal to provide that to its customers, he said.

The company’s TV Time app is able to look at over 40 million monthly consumer reactions that it captures, he noted, pointing out it monitors about 300,000 unique TV and movie titles.

Non-traditional metrics and insights that Whip looks at for clients include sentiment insights that help them understand “what audiences want to see and how they feel after watching certain pieces of content” and competitive insights so they can know what rivals are streaming globally “on certain platforms, in certain territories to understand where to better place content to be competitive,” he explained.

Whip is also able to provide predictive insights that help clients “make sense of where content will perform well before it’s released” and custom insights, “getting very granular with the questions you want to go out and ask certain audiences to help influence decisions,” he added.

EIDR provides many benefits to Whip. For one thing, EIDR’s universal identifiers help to “eliminate a lot of the costly translations between proprietary ID systems,” Esquibel said.

Looking internally at the systems that M&E organizations have, they all
“have internal IDs” and “when we look to outsource and supply this data to our clients, there’s a lot of different internal ID systems and EIDR really helps to bridge that gap and it reduces costs at the end of the day – time and costs that could be put elsewhere,” he explained.

EIDR also lowers risks of misidentification caused by duplication and lack of ID uniqueness, “improves internal asset tracking,” and “improves the ability to match assets and metadata from different databases,” he said.

And that’s “where the value is for a company like ours,” he noted.

He pointed to the NBC TV show Debris and the kind of data Whip Media is able to provide about it thanks to EIDR, which Esquibel said “will play an increased role in helping supply all of this data to certain clients.”

After “grabbing” an EIDR ID, “you can connect it to our internal record of Debris, taking a look at all the metadata that we have” for the show “beyond just where it’s airing and the genre” – so also “looking at stuff like tropes and professions and moods and subgenres,” he explained. “We’re able to supply that in certain formats, in a more seamless manner thanks to EIDR,” he noted.

He also showed how Whip is able to show its clients how the show is performing, including what the engagement data around it is, along with the binge rate and audience rating.

“If you’re trying to make sense of content acquisition decisions and licensing and distribution decisions,” you can look to see what else audiences watching Debris are watching as well, he said.

You can also see what the emotional response to the show was among viewers and what countries have a high index of people who are watching the show, he added.

“In every step of the way, the notion of a universal ID cuts down costs and it cuts down time in translation,” he explained, adding: “Beyond that and beyond what information that an organization like Whip currently provides, in this… environment where we’re shifting to having content be transacted on more efficiently, not letting avails go unnoticed, shifting towards an environment like a marketplace, we see an even increased value add and need for something like EIDR.”

Whip has an exclusive partnership with the media and telecom consulting and market research company Business Bureau (BB).

With BB, Whip has been looking into demand for Debris in certain territories on specific platforms and “EIDR is deeply integrated into BB’s process as well,” Esquibel said.

“Leveraging what” BB has “already done with EIDR, [bringing] it into our systems, combining it with our internal datasets, we’re able to look for content that’s available or not available already in certain territories and platforms, what is the demand, [what] will the travelability look like, what other titles will it perform well next to, what is the engagement and so on,” he explained.

That is “really made a lot easier and cheaper thanks to EIDR and it’s helped with negating mismanagement… and making it so, when we’re eventually providing these insights and transactions… that it’s as accurate and seamless as possible,” he added.