The IBC Accelerator Media Innovation Programme presented a first-of-its-kind project at IBC on Sept. 11 that brought together an all-star consortium of prominent supply chain software companies, service providers and media and entertainment companies that have explored a definitive blueprint for distributing entertainment content globally.

During an IBC Accelerator panel on the Cloud Localization Blueprint, several participants in the project discussed what they said they believe are the key considerations for building a best practice cloud-based media supply chain for content localization from licensing to localization through to final delivery.

The Cloud Localization Blueprint began with a successful pitch from Fabric at the IBC Accelerator Kickstarter event in London in the spring 2022, according to the project team. The initial pitch was around streamlining the localization process with a unified data architecture and that quickly attracted the attention of technology partners and champions, enabling the team to quickly scale up the project in terms of its ambition and engagement, it said.

Thinking back to the start of the project, Rob Delf, Fabric CEO, said during the panel session Sept. 11 that what they were looking to solve were those areas where there was “the most friction in the supply chain today, and it kept coming back to the localization process.”

There are places “where information is not being shared or there’s not visibility,” he noted. But localization workflows were where there were “the most hiccups or the most kind of unknowns,” he said. 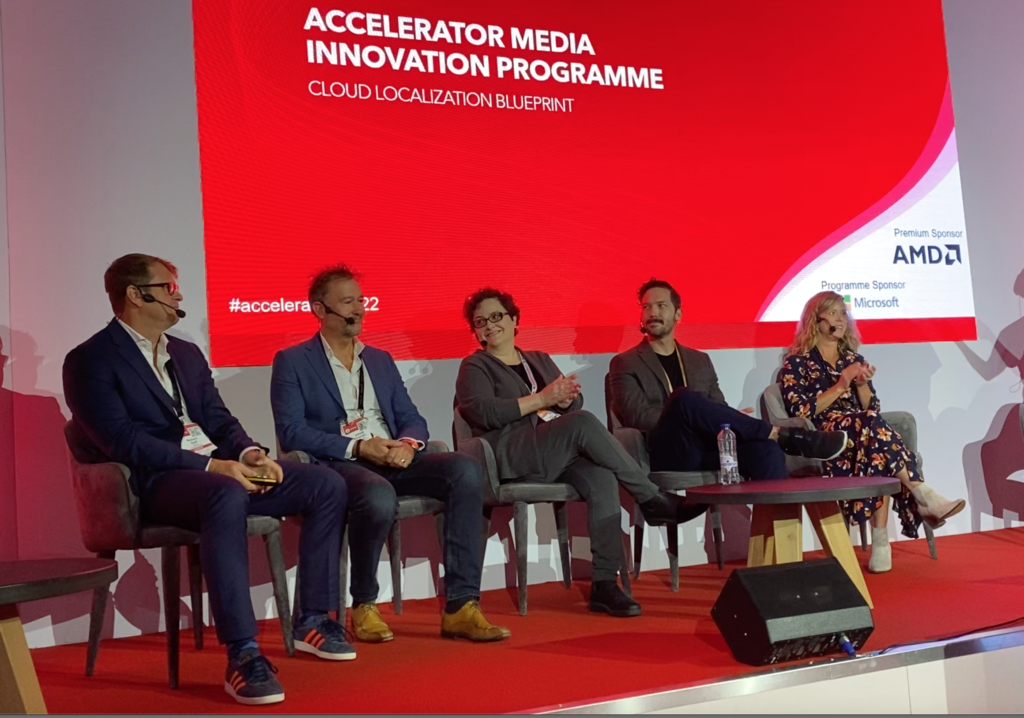 So the team set out to improve that. First, the companies involved looked to see which partners it had common customers with and started to link together the pieces for a cloud localization blueprint, Delf noted.

What they set out to create was a “fully rationalized set of tools in order to exchange data more efficiently,” he said. The team found success but “we did hit some pitfalls,” he noted.

Pointing to the fact that tech vendors and media companies joined forces for this blueprint, Ryan McKeague, senior specialist solutions architect, media and entertainment at Amazon Web Services (AWS), said: “Usually these companies historically have had to sit in the middle of all these workflows between their vendors and their service providers to stitch everything together, and that works well if you’re talking about one or two product or services.”

But stitching it all together “becomes complex over time,” McKeague noted. The team discovered they could include a middle layer and use the Amazon EventBridge serverless event bus as a decoupler, he said.

Also important is that this architecture “allows everybody to see the information they need to see,” according to Alexis Martinez, VP of research and innovation at Iyuno SDI Group. After all, she said: “Making this pipeline more accessible is to everybody’s benefit.”

Kira Baca, chief revenue officer at Rightsline, went on to point out that Rights and Rightsline “come into play at the very beginning” of the process.” Having as much info as possible as a content owner and knowing what you can and can’t do with it must be known quickly, she noted.