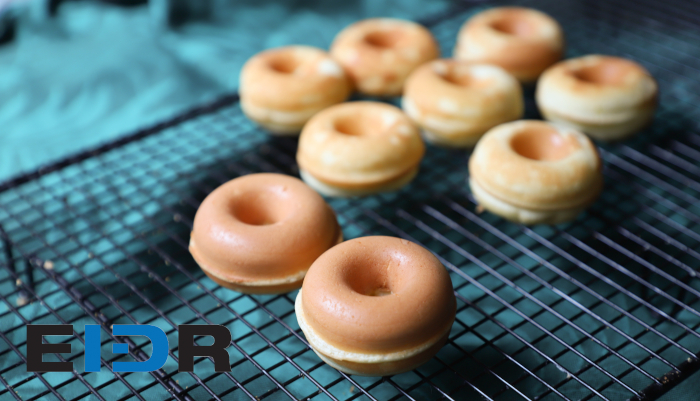 On the face of it, you’d think that National Doughnut[1] Day, celebrated each year on the first Friday in June, honors police officers and their service to the community. Particularly in America, police officers are so inexorably linked with doughnuts and coffee that it’s hard to imagine one without the other – and hard to find a depiction of a bumbling policeman that doesn’t feature a well-placed doughnut. But there’s a practical reason for this.[2] In the 1950s, long before convenience stores were open 24-hours a day, many police officers shifted from walking a beat to driving patrol cars. In most communities, the only store open late at night with room to park a squad car was the local doughnut shop, working to be ready for the morning rush. The association between the two is now so strong that, in 2008 when Michigan’s Clare City Bakery was in danger of closing after 113 years, the nine members of the Clare Police Department purchased the bakery and now operate it as Cops & Doughnuts.

But for the origin of National Doughnut Day, we have to go much earlier and thousands of miles from the American Heartland of the 1950s to the front lines in Europe during World War I. When America entered the War in 1917, they were followed closely by the “Lassies” of the Salvation Army. The first 4 of the Salvation Army’s 250 civilian women volunteers, dubbed “Doughnut Girls,” arrived in France in September 1917. Margaret Sheldon and Helen Purviance produced the first batches of their famed doughnuts using shell casings for rolling pins and fried them in a metal helmet.[3] In 1938, the Chicago Salvation Army began National Doughnut Day to honor these brave women and as a fund-raiser to help the needy during the Great Depression.

Now, more than 100 years later, we can revisit WWI through cinema, without fear of bullets, shrapnel, or poison gas. To help us in this quest, Rotten Tomatoes has assembled a list of the best WWI movies, ranging from The Big Parade (1925) to 1917 (2020), and including Wings (1927), which won the first Academy Award for Best Picture, the documentary They Shall Not Grow Old (2019), and “the epic of all epics” Lawrence of Arabia (1962). All of these works, plus more than 2 million others, can be found in the EIDR registry at ui.eidr.org.

The Best World War I Movies

[1] The alternate (mostly American) spelling “donut” first appeared in print in 1900 in Peck’s Bad Boy and his Pa: “Pa said he guessed he hadn’t got much appetite and he would just drink a cup of coffee and eat a donut.”

[2] For the full story, see The Long, Sweet Love Affair Between Cops and Doughnuts.

[3] See The Women Who Fried Donuts and Dodged Bombs on the Front Lines of WWI.