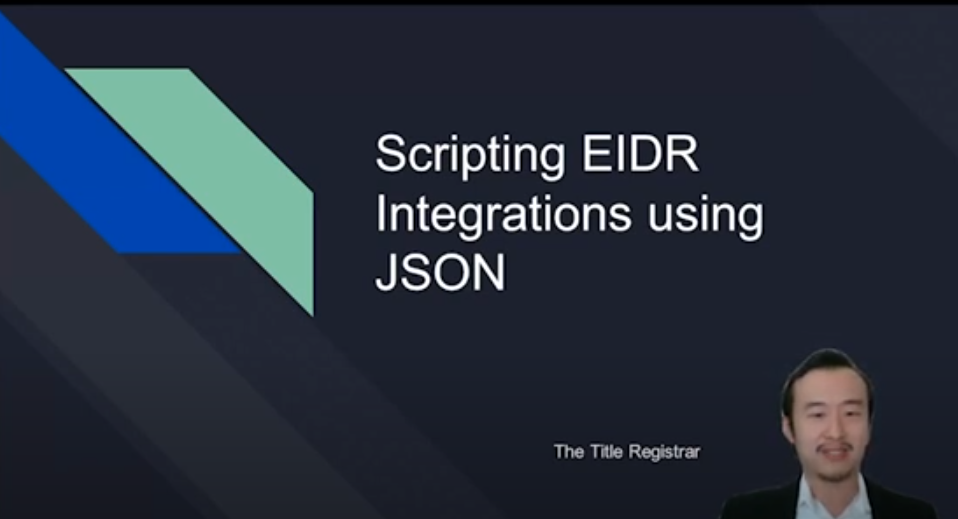 EIDR enterprise integration has, until now, required significant preparation and investment by organizations but the new JSON-based application programming interfaces (APIs) from EIDR and The Title Registrar make the process far easier, according to Sylvester Lan, web services architect at EIDR ID retailer The Title Registrar.

“In the past, people really wanted some easier ways to integrate with EIDR and, because it is so important to our work and essential to many of our workflows, people have been asking for simple APIs such as JSON, he said during the Dedupe, Automation & Apps breakout session “Scripting EIDR Integrations using JSON” that was part of the April 13 EIDR Annual Participant Meeting.

“Now there are a couple of new sources of APIs that address these issues,” he noted. These new solutions make it possible to incorporate lightweight, script-based integrations in days, not months, for EIDR lookup, verification, resolution, and registration/modification of content, according to The Title Registrar.

“Right now there are two ways of integrating with EIDR using these new APIs,” Lan pointed out: EIDR is providing some APIs through the Reshuffle integration platform and The Title Registrar also provides some new APIs and “we’re currently working on a second-generation user interface that will be leveraging these APIs.”

The EIDR Reshuffle APIs include two sets of APIs: Resolution, which checks a single EIDR ID or multiple IDs and is free to the public, and Restricted endpoints that will be free to members and include querying and searching and offer the ability to edit and create APIs when available, he said.

“The resolution and query APIs provide various response formats such as xml, json and tsv, so the developer can pick their choice, and they’re offering in-depth searching capabilities,” he told attendees.

“Overall, it is a proxy adapter for the original xml endpoints, so the structure will remain very much the same,” he explained, adding: “You’ll see the same properties. And so any domain knowledge that carry over from using the xml endpoints will still remain useful.”

Title Registrar also provides two sets of APIs. First, there are Resolve APIs that he said will include a “free tier for public access” with a limit of 20,000 resolutions each month. A stress test showed it is capable of 1,400 resolutions per second, he noted. There is also a Title Registrar query, create and edit API that is “basically done,” he added.

The focus of the new Title Registrar APIs is on “out-of-the-box functionality” and “the responses are curated in order to provide functionality that might help an organization to use these APIs right out of the box,” without much work, he explained.

Lan went on to provide a demo of the new APIs using JavaScript, although the company says the APIs can also be “easily scripted in Python” also.

The demo showed how simply the new integrations can be done, in Python or JavaScript, and how these new capabilities can help improve the reach, scope, and quality of EIDR metadata throughout the entire production and supply chain.