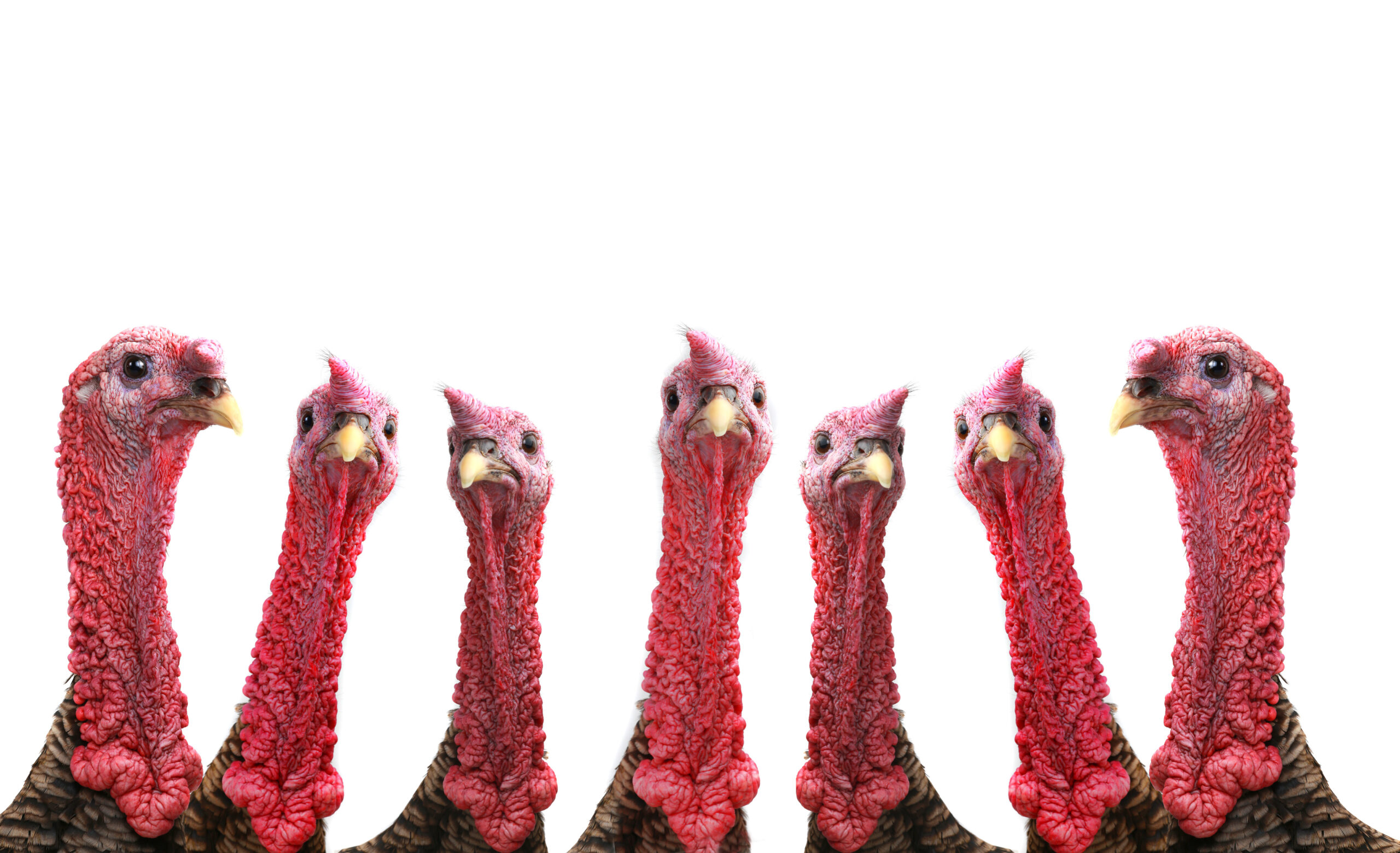 November is all about Thanksgiving in the United States,[1] and Thanksgiving is all about the turkey[2] – it’s even known as Turkey Day. According to the National Turkey Federation,[3] Americans prepare some 40 million whole turkeys each Thanksgiving,[4] accompanied by mashed potatoes, stuffing, gravy, and (with surprising frequency) a green bean casserole.[5]

While roast turkey is a delightful dinner dish, the rumors that Benjamin Franklin also wanted the turkey to be the US national bird are incorrect. His oft-quoted letter (written to his daughter, Sarah Bache, but never sent) is actually a reaction to a medal struck by The Society of the Cincinnati, an organization established by members of the Continental Army who fought in the Revolutionary War. Apparently, the eagle on the medal looked more like a turkey, prompting Franklin to write,

For my own part, I wish the bald eagle had not been chosen as the representative of our country;[6] he is a bird of bad moral character; he does not get his living honestly… I am, on this account, not displeased that the figure [in the Cincinnati medal] … looks more like a turkey. For in truth, the turkey is in comparison a much more respectable bird, and withal a true original native of America.[7] … He is, besides, (though a little vain and silly, it is true, but not the worse emblem for that,) a bird of courage, and would not hesitate to attack a grenadier of the British guards, who should presume to invade his farmyard with a red coat on.

Any discussion of turkey will eventually devolve to the question of which came first, turkey (the bird) or Turkey (the country). It turns out that the bird was named for the country, even though turkey does not come from Turkey.

While the exact linguistic path is in dispute, the general consensus is that in the 15th and 16th centuries Turkish traders were known in Europe for importing guineafowl from sub-Saharan Africa. These birds came to be known as “turkey coq” (aka, “turkey rooster”), and eventually just “turkey.” Eventually, this name was applied to the North American bird and the name stuck.[8] To further confuse things, in Turkey, turkeys are called “hindi” from a mistaken assumption that they originated in India (or that the New World was part of India).[9] Coming full circle, in India the Hindi word for turkey is “tarki.”

Tired of the linguistic confusion (and bird-related jokes[10]), in December 2021 the President of Turkey initiated a national re-branding effort, starting with having all Turkish exports labeled “Made in Türkiye” (pronounced “tur-key-YAY”). This was followed in May 2022 with a request that the UN change the country’s official name from “Turkey” to “Türkiye” (which they agreed to do). Within Turkey, Turkey has always been officially known as “Türkiye,” though “Turkey” was also in common use. Changing the country’s external name is hoped to be “the best representation and expression of the Turkish people’s culture, civilization, and values.” It also avoids association with the slang definition of “turkey,” which the Cambridge English Dictionary defines as “something that fails badly” or “a stupid or silly person.”[11]

The Turks are not the only people that have had to deal with English speakers re-naming their countries. Germans don’t call themselves “German”[12] and Greeks don’t call themselves “Greek.”[13] Those are the English names or those people. English-speaking peoples have a longstanding tradition of re-naming things that already had perfectly good names in a native language. Sometimes, this was a simple anglicization – rendering the native name in a form that was easier for native English speakers to spell or pronounce. (As was the case with Turkey.) Other times, it may have been because the English (and later, the Americans), just didn’t bother to ask – or didn’t care – what the thing was already called.

This is not the first national re-naming in history,[14] or even Turkey’s most famous geopolitical re-naming. So, while Turkey changing the name of Constantinople to Istanbul inspired its own song,[15] it’s still unclear how the national name-change will fare. While that’s being decided by posterity, one can turn to Turkish cinema where posterity has already ruled[16] and has found many exceptional works.

The history of Turkish cinema goes back to the days of the Ottoman Empire. The first cinematic presentation (of L’Arrivée d’un train en gare de La Ciotat aka Arrival of a Train at La Ciotat) in Istanbul (then Constantinople) was in 1896. That was later followed by the first short film (Baba Despina aka Grandma Despina) produced within the borders of the Ottoman Empire (in what is now North Macedonia) in 1905 and the first feature-length, narrative film shot within what is now Turkey (Casus aka The Spy) in 1917. The Turkish film industry started to hit its stride in the 1950’s, going from a total output of 49 films in 1952 to being the world’s 5th largest film producer by the 1970s. Political turmoil took its toll on the Turkish film industry, and both production and exhibition slumped from the 1980s through the mid-1990s. Since 1995, production volumes and the theatrical exhibition market have picked back up, with local productions regularly offering strong competition to foreign imports.

Through their film industry’s rise and fall and rise again, Turkish filmmakers have produced a steady stream of high-quality motion pictures, now identified within the EIDR Content ID registry (at ui.eidr.org). So, this year, perhaps you might consider celebrating Turkiye Day on Turkey Day by enjoying some of the worlds’ best cinema on a streaming service near you.

[1] Observed on the fourth Thursday of November. Canadians get a jump on things by celebrating Thanksgiving on the second Monday in October. The first Canadian Thanksgiving (celebrating safe travel to the New World from Europe) was held in 1578. It moved around the calendar and changed its focus over the years, until it settled into being an annual harvest festival. The date was finally fixed by an act of the Canadian Parliament in 1957. It is not a national holiday, so most folks observe it on the Sunday before. Canadian Thanksgiving is not a turkey-based holiday, and modes of celebration vary across the country.

[2] Contrary to popular belief, the US Thanksgiving is not celebrated in honor of “the first Thanksgiving” observed in the Plymouth Colony (now Massachusetts) over the course of three days in November 1621. Rather, it is a time to give thanks for the prior year’s blessings along the lines of a traditional harvest festival. Abraham Lincoln, who established the holiday by proclamation in 1864, cited giving thanks for the “blessings of peace, union, and harmony throughout the land” as the key elements of Thanksgiving observations. No mention of Pilgrims, Indians, or Plymouth Rock.

[3] A group that represents US turkey farmers and processors, rather than a society established by the turkeys themselves.

[5] See Statista for a list of the most popular Thanksgiving dinner main dishes and sides.

[6] This, from the bald eagle’s appearance in the Great Seal of the United States. Franklin was on the original Great Seal design committee in 1776, and proposed using a scene from Exodus featuring Moses parting the Red Sea. The proposal was not adopted. In 1780, a new committee began working on what would eventually become the Great Seal.

[7] Turkeys are native to North America, where they can still be found living in the wild. They were imported to Europe from Mexico in 1519. Weirdly, the Pilgrims brought turkeys with them when they traveled to the Americas in 1620.

[8] Similar to how all gains (wheat, barley, etc.) were once called “corn,” but now only corn is called “corn.”

[9] Along similar lines, in French they were originally “poulet d’Inde” (chicken from India), now abbreviated to “dinde,” while in Dutch they were “Calicut-hoen” (hen from Calcutta), now “kalkoen.”

[10] According to Sinan Ulgen, Chairman of Istanbul-based EDAM, “The main reason why Turkey is changing its name is to eliminate the association with the bird. But also, the term is used in colloquial language to denote failure.”

[11] Though even that was an improvement over “The Sick Man of Europe,” as the Ottoman (Turkish) Empire was known in the mid-19th through early-20th centuries.

[12] They call themselves “Deutsche,” which makes sense since they live in “Deutschland.”

[14] Examples include Persia to Iran, Siam to Thailand, Celon to Sri Lanka, etc.

[16] Technically, we aggregated “best of Turkish cinema” lists from Culture Trip, Fiction Horizon, Flickside, Mubi, Taste of Cinema, and the Hürriyet Daily News then stratified the list according to citation frequency.

The Best Turkish Movies of All Time