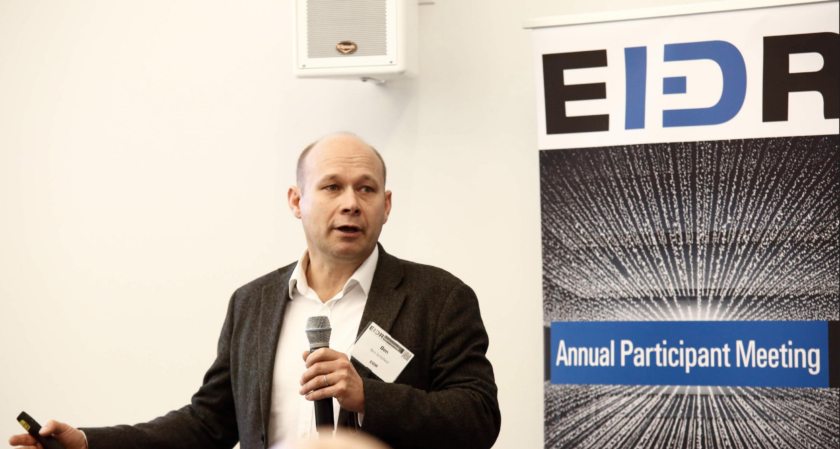 Although the Entertainment Identifier Registry (EIDR) global unique identifier system is now widely accepted as the industry standard in many technical specifications and workflows, organizations still often need to overcome legacy technical, cultural and other challenges when seeking to implement it, according to Ben Schofield, a digital media consultant for the Entertainment Identifier Registry (EIDR).

Once EIDR is adopted by an organization, it’s tempting to think “it’s all going to be easy from here on,” but “getting to that first stage is really just the end of the beginning,” he said Jan. 30 during the presentation “EIDR Implementation: Winning Hearts and Minds” at EIDR’s annual Participant Meeting.

“Typically what we find is, when people have joined up with EIDR, you tend to get a very small group of people who’ve driven it through the organization,” he told attendees. But he said: “Then you hit technology and [some people] say, ‘Why do we need another ID? We’ve already got IDs.’ Or, ‘it’s not on our roadmap [and] we have no resources to be able to integrate this.’”

Schofield chalked some of that up to the “silo mentality within” many organizations and the fact that some of those people “don’t really understand the ecosystem picture.”

But he said: “When you’ve been involved with EIDR for a while, you understand the bigger picture. But if your job is just to get stuff out the door and today you’re using a spreadsheet to do that, you don’t really understand why it’s important. And we’ve seen implementations run into the sand, where the actual people doing the hard work – the heavy lifting – stop working, and they just say to their management, ‘It’s too difficult. I can’t use it.’”

Therefore, he said: “What we need to do here is make sure that we’re listening to them and incorporating [suggested] changes into the next generation of EIDR.” It’s also important that, when seeking to implement EIDR, “you’re aware of some of these challenges – don’t just assume that everyone’s going to see the same light at the end of the tunnel.”

Schofield pointed to ITV’s implementation experience, sharing the lessons learned in that U.K. public broadcaster overcoming the legacy technical, cultural and business case challenges within that organization. One major challenge ITV faced was the huge amount of content it had in its library to deal with, he noted, explaining: “What they’re trying to cover is quite large. If you look at it from the point of view of just data … there’s probably” more than 800,000 different pieces of content that “they think they’ve got.”

But he said: “Now when you actually look at what’s been registered” by ITV, the number is more than 100,000, according to Schofield.

There is still “quite a lot of old content that is never going to be used,” including ITV’s weather and news content, as well as soap operas from the 1970s – content that “really doesn’t have much commercial value, so why touch it?” he noted. But if you “look at where they are in terms of their coverage, they’re probably about half-way there in terms of completeness,” he said. Films tend to be easier to register than TV shows because each program has multiple episodes and there are multiple versions of each of those episodes that are created, he pointed out.

He also pointed out it can prove futile for organizations to think they can ever overcome all their legacy data issues.

What some organizations find, meanwhile, is that some programs they’re looking to register on EIDR were already registered, he went on to say. For example, when the British Film Institute (BFI) was creating its BFI Filmography compilation of U.K. movies, “they found that about 80 percent of it” was already registered with EIDR because many of the titles were already shown on U.S. cable TV networks, he said.

Concluding the presentation, he noted that because EIDR’s staff is so small, it needs organizations using its system to “help us try and make sure that EIDR is going end to end in the ecosystem.”

“It took us six years to reach our first million registered titles and in just two years we have doubled that,” said EIDR executive director Will Kreth.  “As our library expands internationally and more titles become registered, the IDs become more ubiquitous, and usage becomes more standardized, driving better overall value to our members and the media and entertainment ecosystem.”