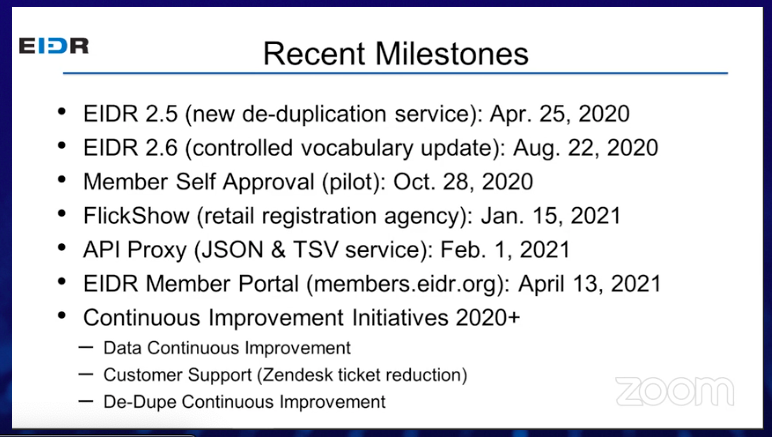 The pandemic may have shut down Hollywood productions and pushed new theatrical releases back a year and more, but it didn’t slow down EIDR and its advancements one bit.

At the April 13 EIDR Annual Participant Meeting, Richard Kroon, technical operations director for EIDR, and Robert Grayson, EIDR support manager with Premiere Digital, offered an update on the 2020 and 2021 milestones achieved by the organization, and provided a 2021 look ahead for everything from de-duplication releases to data improvements.

“We’ve been busy,” Kroon said, showing off the list of milestones, which included the launch of EIDR 2.5 in April 2020, a controlled vocabulary update included in EIDR 2.6, released in August, and a pilot member self-approval services debuting in October.

To kick off 2021, EIDR added the retail registration agency FlickShow to its ranks for registration of movies and TV show titles. In February EIDR expanded its API to deliver new features with JSON and TSV return options, and on the day of the Annual Participation Meeting, EIDR launched a new member portal, at members.eidr.org.

For 2021, look for at least one, and possibly two, new de-duplication releases, with no compatibility impact on existing integrations, continuous data improvements that will identify and address data quality patterns, API proxy development, with EIDR members adopting the new API at no cost, the launch of an alt ID verification service, and the official launch of user self-approval.